Worldwide, there were as many deaths from the Mexican flu pandemic as there were in a normal flu season. However, three-quarters of the people who died were aged under 65. Normally that figure would be about 20%, meaning that this pandemic cost many more life years. This has become evident from a publication by researchers from the US and England and the Netherlands Institute for Health Services Research (NIVEL) in the scientific journal PLOS Medicine. The study was carried out for the World Health Organization (WHO).

The study showed large regional differences. The Mexican flu really took its toll in North and South America where the number of deaths was three times that of Europe. More specifically, in Mexico and Argentina there were nearly twenty times as many deaths. But compared with the Spanish flu of 1918 that wiped out one to two percent of the world’s population, (20 to 50 million people) the Mexican flu pandemic of 2009 was not nearly as serious. In terms of the number of deaths, the pandemic was more comparable to a normal flu season. Worldwide, between 123,000 –203,000 people died from the Mexican flu, caused by the pandemic A(H1N1) virus.

Young victims
In this pandemic, between 62 and 85% of the victims were under the age of 65 years. In a normal influenza season, this percentage is about 20%. NIVEL researcher John Paget explains: “The deaths among young people were disproportionately high which means that the figure for years of life lost was much greater than that in a normal epidemic. So this has resulted in very many productive working years being lost. The impact of the pandemic was therefore much greater than that of seasonal influenza.”

Reasoned estimate
Between April 2009 and October 2010, the World Health Organization (WHO) reported 18,631 cases of deaths (confirmed in the laboratory) from flu. They subsequently commissioned two research groups to study the worldwide mortality figures independently from each other.  The two groups were: the Centers for Disease Control and Prevention, Atlanta (CDC) in the US, which had already published its findings in The Lancet Infectious Diseases and the Netherlands Institute for Health Services Research (NIVEL) which carried out the study in collaboration with Professor Lone Simonsen from The George Washington University.

Actual number of deaths from pandemic flu
The CDC based its estimate on illness and mortality data in a number of rich countries and used a multiplication factor for the various continents which resulted in a relatively high number of deaths from flu for Africa. The NIVEL group based its research on the actual mortality figures in 20 countries, spread over the various continents including China the US, Mexico and South Africa that represent approximately 35% of the world’s population. The researchers extrapolated these mortality figures over the whole world by using a new statistical method developed by NIVEL. The relative figure for flu deaths in Africa was then much lower than that of North and South America. (See figure) 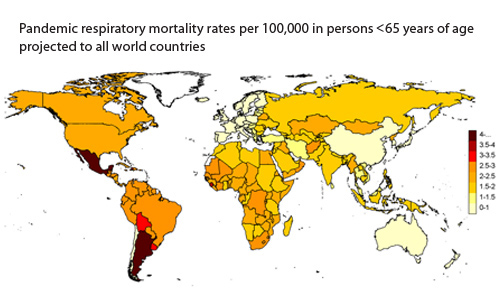